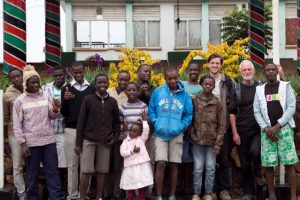 Dagoretti Corner Street Children Programme (DCSCP) is a Christian charity registered in the UK operating through a registered company in Kenya. The objectives of the charity are the prevention of poverty and education of young people especially, but not exclusively, the street children in the Dagoretti Corner region of Nairobi.

In Nairobi, as in many other cities in the developing world, poverty, death of parents and many other factors drive large numbers of children to a life on the streets. They live in squalid conditions on rubbish dumps, in sewers, under bridges and other places where they find safety and shelter. They get what food they can by begging, searching waste or stealing. They are at risk of being drawn into crime, drugs, exploitation and trafficking.

In 2004 Paul Fellowes, a member of Wotton-under-Edge Baptist Church, bought an acre of undeveloped land in Riruta, a deprived suburb of Nairobi near Dagoretti Corner. DCSCP was subsequently launched and bought the land from Paul. Over the years the land has been developed to provide living accommodation with electricity, running water, shower and toilet facilities. The rooms all have concrete floors and include a school room equipped with desks where the boys can study and do their homework. A small football pitch and vegetable plots complete the facility. Currently 9 boys aged between 15 and 20 years are living there, considering it as their home. The boys are cared for by a couple, Mutunga and Florence, who live there with their three young children. Martin and Rachel, who live in Nairobi, oversee the work on behalf of the charity. Five trustees, all resident in Gloucestershire, manage the charity. Basic running costs of the programme are currently about £1,500 per month covering food, education, clothing and staff costs. In addition, from time to time, the charity needs to meet significant legal and property development costs. 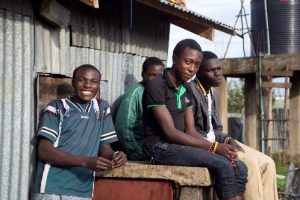 Children who have lived on the streets may have severe social, medical and physical difficulties.  They spend their first few months with the charity being helped to adjust to life with others.  The boys are encouraged to contribute by sharing food preparation, working on the vegetable plots and general maintenance of the property. Once they are ready, they start attending local schools and begin progressing towards a worthwhile place in the community. A personal development plan is prepared for each boy for whom the charity is responsible to give them the best opportunity to find employment when they leave. Several boys have already passed through the programme. At weekends many youngsters come from the surrounding area to join with the boys. Mutunga and Kenyan volunteers run a mixture of games and educational activities. On a typical Saturday around fifty youngsters can be seen playing football, handball, chatting and generally enjoying themselves. On Sundays the boys attend local churches or hold a simple service at the land.

The work is funded by individuals in the UK, monthly soup lunches, specific fund-raising events and by regular donations from Wotton-under-Edge Baptist Church. For example, the soup lunches contribute about £400 each month. All money raised is used directly in the charity, none being taken out for trustees’ expenses. A small amount of money is also raised in Kenya by selling excess vegetables grown and water from the well on the property. Currently, without support from the UK, activities would cease quickly leaving the boys no choice but to return to a life on the streets.

The vision is to provide a self sustainable means of delivering care for street children and to work with others who are at risk of ending up on the streets.

Some Boys in the Programme… 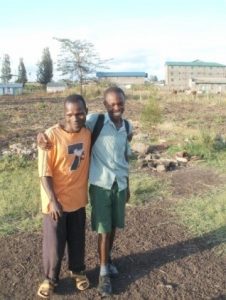 When we first met Godfrey in 2009, he had been on the streets for 18 months after being abandoned by his parents. Godfrey started coming for meals and after suffering some severe abuse on the streets, was taken in for his own safety. Slowly he responded to love and care and was sponsored by the charity into primary school, (primary school education is now free in Kenya but money is desperately needed for uniforms, books, food, and clothes). Godfrey struggled but worked hard and did well, his grades improved and his confidence grew.
This is a picture of Godfrey in his school uniform a year after restarting school. He had to start with primary school but, with help, he was soon ranked 86 out of over 200. The charity sent him to boarding school in January 2013. He has now graduated and set up a home of his own. 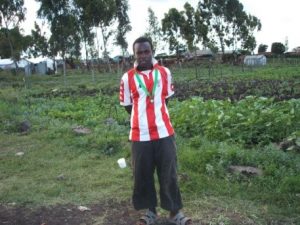 Simon is an AID’s orphan living with his aunt, who is in her 20s. She is unemployed and struggling herself.  Simon had completed primary school but was unable to afford secondary school.  He spent his days on the streets but occasionally returned to his aunt at night. He was at risk of remaining permanently on the streets. In 2009 the charity sponsored Simon into secondary school. He worked hard and gained good results. He now helps every Saturday with the meals and teaches football to the younger ones.

In order to raise funds for the Dagoretti project we hold regular soup lunches. These are held on the second Friday of every month from 12 – 2pm in our church hall . All soups and puddings are home-made; soup and a roll costs £3.50 and puddings are £1.50, with a choice of four or five soups and puddings.  We also provide take-always to local shops and office workers in their premises.  A big thank you to all those who loyally come to the lunches and support us financially every month. The lunches involve all the trustees and a wonderful bunch of volunteers. 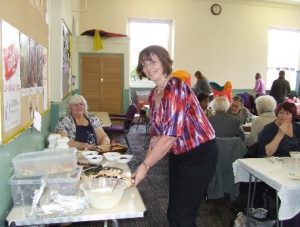 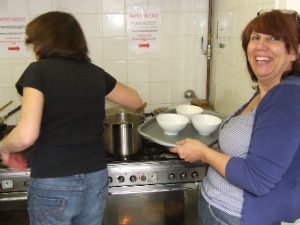